On being interviewed and interviewing 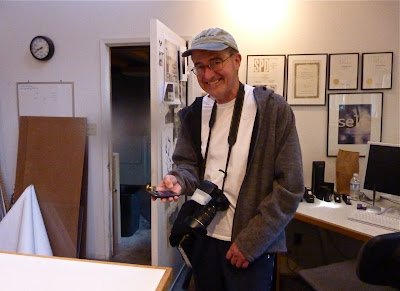 Chris Gulker after our interviewing each other in my office.

Chris Gulker along with his wife Linda Hubbard Gulker and Scott Loftesness run InMenlo a hyper-local blog in my town of Menlo Park, CA. When an article concerning me appeared in a local paper they asked if I'd consent to being interviewed and so I agreed. I wasn't sure what to expect when Chris arrived to both shoot photos and interview me, but it turned out to be less an interview than good conversation with a fellow photographer who has wealth of experience in other areas as well. He has freelanced, worked in newspapers, and in technology. He's shot Hollywood celebrities by the bushel as well as helping deploy some of the earliest web publishing tools at the old San Francisco Examiner in response to a newspaper strike. He's also worked for Apple and Adobe. Chris' good cheer shines through even allowing for the health issues that have been visited upon him. I've often remarked that one of the main benefits of my commercial photography was the opportunity to meet and converse with so many wonderful people. Today Chris reminded yet again of that simple pleasure.
Posted by Robert Holmgren at 6:43 PM